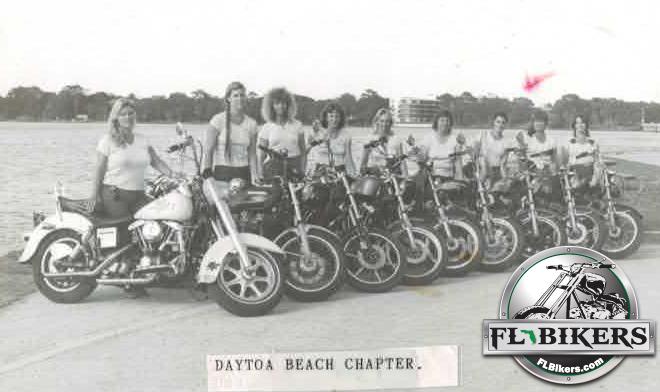 By flbikers September 2, 2021 No Comments

Formed in Florida in 1983 by Jennifer Chaffin, Leather & Lace is one of the most well-known female motorcycle clubs throughout the country.

In the 80s, there weren’t nearly as many female-only motorcycle clubs as there are today, and Jennifer along with several other women realized the need for one in their home state of Florida. As Jennifer put it, “I was tired of having only two choices when I rode… riding alone or riding with the guys.” According to Jennifer, back then riding with “the guys” was not always fun for women riders.

She figured other female riders would feel the same and decided to buy ad space in several biker magazines. After the first round, she had enough inquiries to start a club.

The message struck a chord with women riders all over the country and, over time, the club grew well beyond Florida’s borders.

According to the club’s official website, the name Leather & Lace isn’t just catchy or cute, but has symbolic meaning. “Leather” stands for the inner strength that women possess, while “lace” is representative of women’s inherent femininity. Combined, the name exemplifies how women can be both strong and feminine and don’t need to give up one for the other.

Those who are interested in joining today can choose between two different types of membership: independent and chapter.

The requirements for an independent member are: female, 21 years or older, own and ride a motorcycle, attend the national business meeting each March. The dues are $150 per year.

The requirements for a chapter member are the same as for the independent member, but chapter members are part of an official and recognized chapter of the Leather & Lace motorcycle club. Chapters set their own dues.

Leather & Lace’s charity, Lace Kids was founded on the belief that it is the world’s children who hold the keys to the future. The club works with local communities to take care of underprivileged kids and set them up for future success as much as possible.

The primary purpose of an RC (or riding club) is to ride motorcycles. Beyond that, an RC does little else. Meetings center around riding and few other commitments are expected of members.

Leather & Lace is NOT an RC. Leather & Lace is a full-fledged motorcycle club, which requires a deep level of personal commitment from every single one of its members. As anyone who scans the club’s official website will notice, they don’t just see themselves as a female motorcycle club, but as a sisterhood that is connected through their shared love of riding and strong desire to do good.

As with male motorcycle clubs, members of Leather & Lace wear three-piece patches that earned by each member over time through dedication, hard work, and commitment to the club.

At the time Leather & Lace was founded, there were few spaces for women within the motorcycle community. Even if other clubs did allow female members, they weren’t given as much weight as their male counterparts.

Although much has changed since the 80s, Leather & Lace remains a female-only club to stay true to Jennifer’s mission, which was to bring women together who have a serious interest in motorcycling and making a difference in the lives of others.

The club represents not only a space for women within the motorcycle community, but also a sisterhood. It recognizes the importance of creating spaces for women in traditionally male dominated areas, such as motorcycle riding.

As many men who are part of motorcycle clubs will agree, it’s a source of joy in their lives to share their passions with like-minded people. That’s what Leather & Lace does for female riders. It gives them the same space to share in their passions with women across the country who hold the same love for riding.

And whether you’re male or female, we’ll leave you with this piece of advice taken straight from L&L’s website:

Never ride faster than your guardian angels can fly!