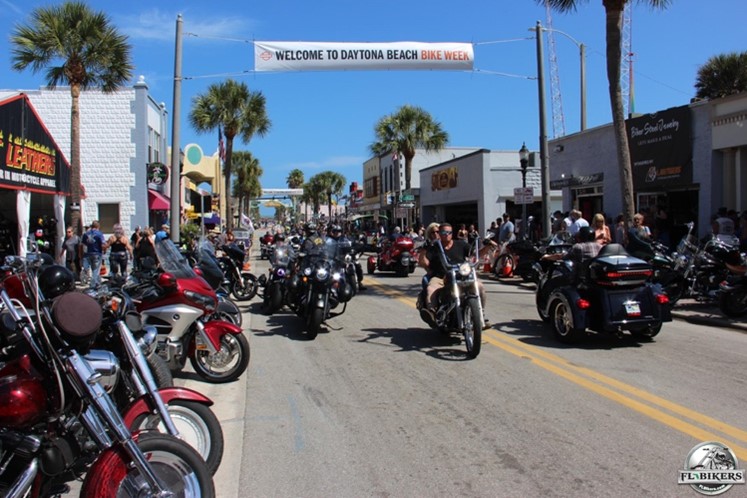 Some call it adventure; bikers call it a way of life. A big part of motorcycle culture is the decades-old tradition of Daytona Bike Week. Each year in March, arguably one of the most beautiful times of year to visit the sunshine state, more than 500,000 people from around the world travel to the east coast of Florida. The famous 10-day bike rally features motorcycle racing, entertainment, food, cold drinks, and a variety of vendors from around the state.

If you’re a motorcycle enthusiast, you know Bike Week has been a mainstay in biker culture for decades. In fact, some say it’s the biggest motorcycle event in the world. Believe it or not, Bike Week was not originally a week of carefully planned out events, but simply a bike race on the sandy shores of what has become a popular vacation destination.

Daytona Bike Week’s official website, www.OfficalBikeWeek.com, created by current organizers, the Daytona Regional Chamber of Commerce, details the fascinating history of how the event began and how it has evolved over the years.

According to the website, Bike Week began in January 1937 coinciding with the inaugural Daytona 200 race, a 3.2-mile course that took place on a mixture of hard-packed beach and part on pavement. The original event was launched by a group that included future NASCAR president Bill France. The winner of that first race was Ed Kretz of California, whose speed averaged 73.34 mph.

The event remained a motorcycle speed competition for several years, only taking a brief hiatus during World War II. The last Daytona 200 held on the beach and road course took place in 1960 and then moved to the newly built Daytona International Speedway.

While the organized race continued to attract more and more people over the years, the questionable events surrounding it weren’t always well-received by the community. Locals became somewhat afraid of the visitors and relations with law enforcement grew strained. As things continued to worsen, a special task force was eventually created by the city in cooperation with the Daytona Regional Chamber of Commerce to take over the event and create a safe space where both bikers and locals could come together. Today Bike Week has transformed into an organized 10-day festival that expands throughout Volusia County welcoming thousands of motorcycle enthusiasts annually.

Bike Week isn’t just an annual event, it’s a huge part of motorcycle culture in America. Rallies like Bike Week create a centralized place where thousands of bikers from around the country come together to ride, meet new people, and show off their bikes. Bikers are often quoted as saying, “It’s not about the destination, it’s about the ride,” and for any motorcycle enthusiast, all roads lead to Daytona in March.

Bike Week is a Daytona Regional Chamber of Commerce event and will take place March 3-12, 2023. Our photographers at www.FLBikers.com have been attending Bike Week since 2016 and have captured thousands of photos from Main Street and other locations. Please visit our gallery at https://flbikers.com/daytona-bike-week-3-6-22-part-1/. For the latest details and information about the event visit www.officialbikeweek.com.